Two airmen, Davis and Jones, were assigned to the induction center, where they advised new recruits about their government benefits, especially their GI insurance. Airman Davis went right to it with an enthusiastic pitch.

“Could I have everyone from row three to row one stand up please?” he projected through the center. The men stood up.

“Men… the boys upstairs are sayin’ one out of every five of us won’t make it back home outside a wooden crate… that’s everyone standing up in this room.” There was silence.

“You wanna go out there… into the fray knowing if something happens to you, they’ll have nothin’?

“Men, it’s your duty… GI insurance will give you the peace of mind to go out there and get the job done right.”

Capt. Smith, the supervisor, was impressed. The men were signing up… some of them were white as a bleached sheet. Airman Davis’ success rate was 40%! The goal had been 30%.

But Capt. Smith couldn’t help but glance over at airman Jones. He noticed Jones was having a staggeringly high success rate, selling insurance to nearly 100% of the recruits he advised.

Rather than ask Jones about it, the captain stood in the back of the room and listened to his sales pitch. Jones explained the basics of the GI insurance to the new recruits and then said:

“Now,” he concluded, “which group do you think they are going to send into battle first?”

The Pentagon is in a pickle. They need to prioritize now more than ever. Yet they have expensive tastes: war, tomorrow’s gadgets, employing nearly half a million people and a first-rate military with all the bells, whistles and toys.

Heck, they even like their cost-cutting initiatives to be expensive…

Alas, there’s no more moolah. Not that that’s stopped the government before. But eventually, something that must end will end. 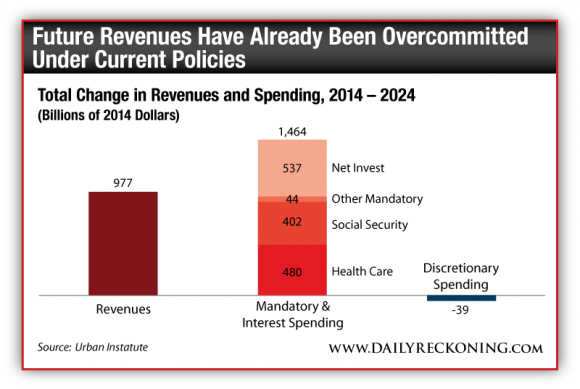 That bar on the right shows a projected net loss of $39 billion. Money that is needed to fund general government agencies and the Pentagon. The DoD, it seems, is reaching the end of its rope.

If they’re worried, though you can’t tell. Yesterday, we told you that the Pentagon had spent half a billion dollars so far to fight the Islamic State (ISIS) just this last month.

Currently, it’s spending $7.5 million per day just for airstrikes being conducted in Iraq. Last week, they started bombing Syria and equipping and training Syrian rebels. That added more than $500 million to the tab.

An “additional $15-20 billion a year it will take to battle ISIS” reports the Fiscal Times, “was projected by American University military expert Gordon Adams. That spending would come on top of the administration’s defense budget request for fiscal 2015, which begins Oct. 1, including $496 billion for personnel and general DOD operating costs as well as $58 billion for ‘Overseas Contingency Operations,’ which covers the actual cost of wars.”

And we’ve only begun to spend on modern warfronts like “the fifth domain of war,” which our own Byron King forecasts will only increase.

“When you follow news about the U.S. defense budget,” explains Byron, “there’s a great need to spend just to recapitalize traditional platforms such as ships and aircraft. There’s also pressing need for funds that have to go for new munitions. But now, it’s evident that cyberwarfare will begin to soak up more and more defense spending.”

How can we spend on everything all at once? Easy. Just throw it on the credit card!

That should work until it doesn’t anymore.