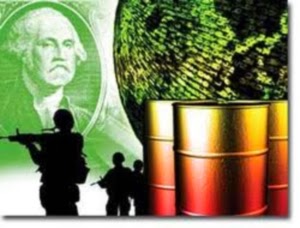 The NWO: Petro-Dollar vs. Ruble-Gas

Guerrilla cannot save the Petro-Dollar

The Petro-Dollar was recently enforced during the 2nd Iraq war in 2003 and in Libya in 2011, yet thereafter the US lost about the N.Korean, Syrian and Iranian WMD. The US friendly Egyptian president Mursi of the Muslim-Brotherhood (MI6) was toppled in favor of Al-Sisi who is friendly to Russia & the GCC. All western attempts  to topple Al-Sisi by means of Al-Qaeda (AQ) based in the Sinai have failed insofar.

This is a relevant point because Blackwater/Greystone is reported to be operating in the Ukraine in the hundreds, since not later than last weekend [Link]. They operate on the side of the Putsch “rebels” whose Party is named Udar i.e. a Punch, like in boxing – to the face of the elected regime which it ousted.

What got NATO into Ukraine?

NATO is controlled by a banking oligopoly, namely a cabal of oligarchs.Oligarchs are products of a knock-out tournament thus are “money on the table”, aka ups for grabs, fatalists. They have been running risky positions vs. Russia since they orchestrated the triple-entente between the UK, France and Tsarist Russia in the late 19th century, which was the framework for instigating WWI and which lead to the ‘allies’ of WWII which they bankrolled on all fronts too. In between the world wars they usurped the Russian kingdom by means of the USSR – lead by the Comintern[Link], which exterminated dozens of millions of civilians– including up to 10 million in the Ukraine – the Holodomor [Link].

Ukraine hasn’t recovered from the utter Genocide of the Kulaks by the Wall-Street proxies named the Comintern in 1917 onwards, with the Ukraine not being able to efficiently manage its own fields, leading to the Chinese leasing of Ukrainian soil, which was a symptom of Ukrainian default already.

Ever since the collapse of the Soviet Union, and till the rise of Putin to lead Russia, the western Oligarchs looted Russia mercilessly far beyond what most westerners know and brought its population to the verge of collapse [Link: Who Lost Russia? by Webster Tarpley ].

It seems that ever since those 1990s, the west is convinced Russia was a rag-tag up-for-grabs, which just needs be beaten hard enough in order to yield even more gains.  This deep conviction may explain why they have kept playing tactical poker against strategic Geo-politics Putin. The persisting difficulties in the Ukraine, in conjunction with the recent regression of developing economies the world over, might have convinced the west it was could take advantage over the Ukrainian lack of control, which con-sensually explains the Corruption, Unmanageability and Bankruptcy, in order to commit a violent and abusive Overtake of the country and of its treasures.

It also seems like the west didn’t perceive the role of the heavy and successful Russian military defense of the Sochi games, in providing a stepping-stone for a swift overtake of Crimea, which lays a few hundred kilometers from Sochi along the shores of the Black sea.

Most surprisingly, the USG(overnment) doesn’t seem to have learned from the British refusal to attack Syria and from the failure of the ardent and long-term sanctions regime on Iran, with the US making now an utter mock of itself talking loud about isolating Russia, while both Germany and UK have already in principal left the US at offsides on this match-field. Under the present peculiar circumstances, this ‘isolation’ talk may have an upside in the sense of the USA taking a long-term diploatic attitude to the conflict, rather not rushing to fight Russia by means of heavy weapon systems. This upside becomes more evident given the lack of any substantial deployment of US militray and airforce capacities to Europe: the cold war deployments have been retracted nearly entirely over the past 20 years and no meaningful reinforcement is reported to have been reposted.

This long-term diplomatic avenue of attempted/virtual sanctions might have suggested at an American de-fact retreat-path, yet the out of whack girl choir of Cathrin Ashton, Susan Rice, Samantha Powers and Hillary Clinton, which grossly villifyes the only real statesman in this story – Vladimir Putin, suggests the west has gone desperate enough in order to risk an open war with Russia, and perhaps with China too, for the bounty of Ukraine’s dwindling resources.

No wonder then that Russia has been the focal point of Gender-bending propaganda of Pussy-riots and of public obscenity. The above psychodrama puts the USA at even greater odds with the entire world, less for the EU countries which are thus found under de-facto US occupation: militarily, politically and financially (central-banks).

The globalist status of the USD, be it Petro-Dollar, likewise its reserve-currency role,is on the one hand based on an unprecedented comprehensive control of the US over  the Arab Middle-East & North-Africa (MENA). On the other hand the status of the USD is delimited by the Gazprom monopoly on natural-gas supply across Europe.

This delimitation is now put to the test in the Ukraine. The diplomatic Avenue taken by NATO suggests that this delimitation is to become a status-quo, thus the Petro-Dollar shall keep on declining gradually, rather not necessarily abruptly from a great height in the short term, in a way which would have reset the entire global financials – like one Silver metals promulgator has suggested [Link].

2. Prof. Kissinger orchstrated the Yom-Kipur war against Israel in October 1973,  in order to excuse the ‘oil embargo’ by OPEC which in turn is Anglo-America,

which shought this way to rebase the dollar on Petroleum instead on Gold. Namely, sharply inflating the Petroleum price which is sold only for USD.

The secondary purpose of that war was to win Egypt for the west, in order to secure the flank of the Middle-Eastern OPEC deployment. Egypt oughts to have

been exchanged for Vietnam, vs. The USSR, in the Paris accords of January 1973.

3. The Khomeini Shiite revolution in Iran was an admitted CIA operation and  explains the affiliation the Tehran regime holds to the USA.

4. Prof. Brzezinski has been trying to sueeze down the Russia since the 1970s,  when he started the Afghenistan war against the USSR.

Faysal Al-Husseini in his Last Interview: The Oslo Accords Were a Trojan Horse; The Strategic Goal is the Liberation of Palestine from the [Jordan] River to the [Mediterranean] Sea’.

6. NATO support of the Chechen rebellion against post-Soviet Russia.

NATO started the Yugoslav devolution war by means of financing the Albanian
mafia through prominence in the markets of narcotics and prostitution in western
Europe. NATO occupation of Croatia and Bosnia secured pipeline interests [Link].
In the below Video testimony, the Muslim are accused
of having butchered their own people for provocation against Serbia:

Recently, the EU has repeated the Kosovar Modus-Operandi in the Ukraine, having massacred both protesters and Policemen, Link: Estonian Foreign Ministry confirms authenticity of leaked phone call discussing how Kiev snipers who shot protesters were possibly hired by Ukraine’s new leaders, i.e. by the EU and in particular reporting to Cathrin Ashton.

Now the EU keeps on pushing Russia in a most blatant manner, disregarding:

1. The Russian geography which includes Crimea for centuries now.

2. The Russian demography which comprises 78% of the Crimean population.

3. Russian leasing contract with the Ukraine over Crimea,
which allows Russia up to 25,000 soldiers in Crimea.
Only after Crimea decided on a swift vote for joining Russia, was that number crossed.

This EU push, in support of its Kiev putsch, is heralded by the President of the European Union Council, Herman Van Rompuy, who opposed the Crimean Autonomy – perhaps because it is democratic like the ousted Kiev government was: Link: EU and US announce sanctions to Russia as talks linger on.

Throughout the entire conflict, it seems that the US part is played entirely by the CIA on behalf of the Petroleum Conglomerates, rather not directly by the White-House, i.e. The USG (US Government) doesn’t appear to be leading the events like Putin seems to do on the Russian side of the conflict. In the following Video coverage  Nuland is seen speaking next to the Chevron insignia [Link], when she admits the USA has poured over 5 Billion USD to Ukraine for political intervention purposes.

There seems to be a collusion of interests between the CIA and the KGB/FSB in exterminating the US white-Christian civilization, with Obama doubling for them both. This is basically the same old Robbing-Barrons/illuminati conduct of abusive relationships to which LGBT are bound, which typify them and which they practice and adore [Link]. Obama was dubbed a Manchurian Candidate right from the start of his first Presidential election campaign [Link], while his official public image is a myth [Link]. Obama was later exposed to be utterly gay [Link] and has been suspected to be a KGB agent – installed along the lines of the original Manchurian Candidate scenario while also suspected to be doubling for the CIA [Link]:

Where was Obama during his “Columbia” years, then? – at the CIA school for double agents?

MLK was targeted by the FBI’s COINTELPRO. This suggests MLK (Martin Luther King) too was KGB, just like Rosa Parks was.

The weakening of the USA means the CIA takes it over:

1. A docile public allows the CIA via DHS to become KGB.

where the DHS is going to corral them e.g. in to FEMA camps,
like it would anybody who disapproves of ‘the regime’.

3. A military non-intervention policy leaves the scene for covert wars, ran by the CIA.

The CIA lead the false-flag bay-of-pigs invasion to Cuba under the guidance,

i.e. dilettante & harmful intervention, of president JFK. The lesson learned for
Obama, which he seems to implement very well – is to keep himself at a safety
distance from the entire operation and apparatus altogether.

Obama originates from a generational dysfunctional family [Link], the identity of his Biological father is at large, likewise his place of birth. Thus it is not surprising he is reported to be a Dysfunctional executive [Link: Obamacare], [Link: Missile Shield & general weakness], although in the aforementioned cases of Obamacare and of deploying a missile “shield” to central-Europe it is much referable to refrain or to fail than to have it effectively implemented – in both cases risking a mass extinction of dozens of millions of innocent civilians while quite likely triggering the total collapse of Christendom.

Obamacare would pump more trillions USD to the banksters, thus the Russian incntive to object it – just like of pretty much everybody else’s. Likewise the prospect of a large overt war which would transfer trillions USD of tax payers’ money in to the pockets of the Military-Industrial-Complex owners.

Obama wouldn’t want to be involved in managing a military crisis, while the defense establishment wouldn’t like him to be involved either. It is an on-purpose symbiotic relationship constructed by the secret services, which rise is exemplified by the present conflict in the Ukraine. The present crisis in the Ukraine could end up like the CIA-lead failed coup d’etat crisis in Cuba which developed into a missile crisis, with a missiles crisis already evolving from Kaliningrad to Syria.