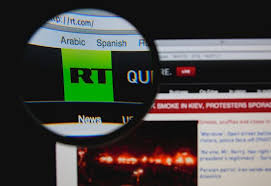 Anyone who’s been following our posts recently can’t possibly blame us for having an anti-Russian bias. Therefore we have no problem saying the following harsh,yet true,words on the recent RT fiasco:

Merely a day after Kremlin presstitute Abby Martin’s laughable stunt of “bravely criticizing Russian policy in Crimea”, Russia Today’s clumsy limited hangout attempt of trying to lure Soros programmed left-liberals to their propaganda matrix in this manner has backfired quite miserably when yet another presstitute, Liz Wahl, quit her job on air, citing the propagandist nature of this so called “alternative media source” (as it is understood by its usual mass audience of Lefties and Libertards).

Abby’s goal (or that of her handlers) was apparently to create the impression that the Russian government is willing to tolerate dissident opinions from its hired teleprompter readers – but this only emphasized RT’s nature as Russian government operation, thereby sabotaging their perception management plan for western youngsters who have lost interest in the west’s controlled corporate media. Their hysterical attempt to claim that they “will send Abby to Crimea to study the situation” became comical when she denied any intention to go there. Then came Wahl’s resignation on air (presumably the result of pressure from her peers in the US MSM).

In many ways, RT is far worse then BBC, because of its insidiously deceptive nature. Everyone knows BBC is British government propaganda, so there are no surprises when watching them. RT, on the other hand, has successfully positioned itself as a “new and exciting alternative” when in reality it’s nothing more then Russian government propaganda,tailor made for the Twitter generation. The best disinfo consists of 90% truth. In RT’s case it’s about 30% truth used to lure the dupes into their Psyop. Once the dupes are sufficiently conditioned, they will become highly susceptible to greater indoctrination into the Kremlin’s long term agenda. It’s up to you, the readers, to support genuine independent media (like Osnet Daily) and reject government operations like RT, even if they offer more substantial information then the western corporate media. There is a sharp hook at the end of their bait.

She’s been getting a bit of snark from Twitter over her belated realization that maybe RT is a less than rigorously objective news source. Yet I’m more exasperated by RT’s viewers than by hosts who are, after all, only making a living, however dubiously, by reading from the Kremlin’s script.* In particular, how can certain libertarians or government-skeptical leftists think that as long as the spin is coming from a government other than America’s it must actually be the truth?

Unfortunately, the answer is all too plain: if you think that the U.S. federal government is the source of all evil in your life, your country, and the world, then it stands to reason—almost—that whatever contradicts Washington is on the side of truth. Moscow and Beijing therefore become beacons of light. The ideologues who fall prey to this don’t necessarily hate America—there’s a distinction between the country and its government, after all—and they don’t think of themselves as pro-authoritarian or, in the case of the Middle East, pro-dictator. But they do think, ultimately, that foreign authoritarians and dictators are really more liberal than the liberal-but-really-authoritarian United States. It’s a sour love affair: the U.S. fails to live up to liberal ideals, or even to come close, so regimes that have no intention of abiding by them must be no worse, or indeed a great deal better.

The number of such misguided people is pretty small, but they play a very useful role for the likes of Bill Kristol and other hawks, who can then point to these few loons, like the scattered nutcases with 9/11 Truther placards at a Ron Paul rally, to demonize everyone who’s against American military misadventures. The RT libertarians/leftists then turn around and tell those whose ranks they’ve infected, “See? You get attacked as ‘unpatriotic conservatives’ even if you don’t make the case that Saddam Hussein is just a misunderstood humanitarian!” Neocons are fond of talking about how the extreme left and right intersect, but it’s the Kristols and RTers who really depend on one another. Each justifies the other’s crackpot arguments, at least in a world in which ideology counts for more than hard reality.

The reality, for the Ukrainians and for Russia, is complex and grim. For Americans—neocons and RTers alike—it’s quite simple: we face so few direct threats to our security and public order that we can afford to indulge in fantasies about how oppressed or endangered we are, and those fantasies lead to profound misunderstandings of places like Russia and Ukraine that have to deal with “history” in a sense that is altogether foreign to us. RT doesn’t create our fantasies, of course. It just takes easy advantage of our fantasists.

*I’ve been on RT, and China’s equivalent (and seemingly better funded) network, and there weren’t any scripts involved. But that’s to say these are “authoritarian” networks, not “totalitarian” ones. That Wahl’s feed was live is further proof of that. I’m perfectly willing to talk to such state broadcasters—but not to listen to them without my bullshit filters on.