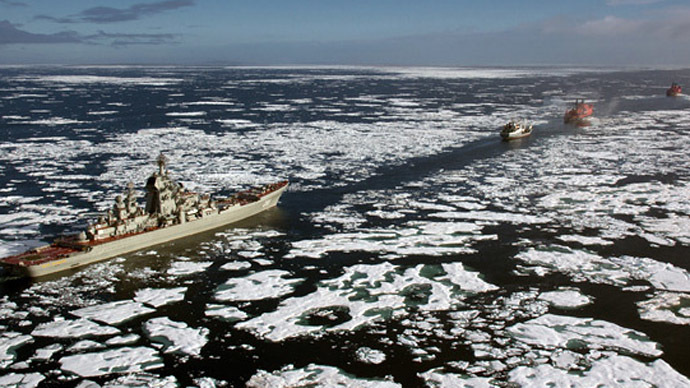 By the end of this year, Russia will establish the Northern Fleet-Unified Strategic Command.

Russia will establish a new strategic military command in the Arctic by the end of the year, according to local news reports.

The report went on to say that the Northern Fleet-Unified Strategic Command “will be responsible for protecting Russia’s Arctic shipping and fishing, oil and gas fields on the Arctic shelf, and the country’s national borders in the north.”

Russian President Vladimir Putin has made boosting Russia’s military presence in the Arctic an important priority during his third term in office. At a meeting of the Russian Defense Ministry Board last December, Putin said: “I request that you pay special attention to the deployment of infrastructure and military units in the Arctic.”

Other Russian officials have said that Moscow will reopen at least seven airfields as well as a number of ports on the New Siberian Islands and the Franz Josef Land archipelago in the Arctic. Moscow has also begun enhancing its aerospace defense and early warning radars in the Arctic region. Last November the commander of Russia’s Aerospace Defense Command stated: “The expansion of [missile early warning] radar coverage is one of the key areas of our work, especially when it comes to [Russia’s] extreme north – we have already started the deployment of electronic warfare units in the Arctic.”

The Russian Navy has also made boosting its presence in the Arctic a key priority for 2014. In December of last year RIA Novosti paraphrased a Russian military spokesperson as saying that in 2014 “The Northern Fleet will conduct sailing and diving expeditions in the Arctic and develop a series of ice-class patrol ships to protect the country’s interest in the region.”

The Northern Fleet-Unified Strategic Command is aimed at bringing the disparate efforts of Russia’s different military services—as well as its coast guard presumably—together in a coherent manner.

The melting of the Arctic ice has opened up vast energy reserves and will create new strategic shipping routes that will have huge implications for geopolitics in the coming years. For example, the new shipping lanes produced by the melting of the ice will greatly reduce the distance between Asia and Europe as well as Asia and North American states like Canada and the United States.

As a result, there has been something of a scramble among Arctic countries and their neighbors to assert claims over the Arctic region. As my colleague Shannon reported earlier today, China has been re-asserting its interests in the Arctic region this week following America’s decision to appoint an ambassador to the Arctic last week.

With the possible exception of Canada, no country has the potential to benefit more from the warming of the Arctic than Russia, which has the largest Arctic border of any country in the world. Moscow has long coveted a warm water port, which was an important consideration behind its invasion of Afghanistan in 1979. A warmer Arctic will allow Russia to connect its Northern and Pacific Naval fleets for the first time. Russia also considers its exclusive control over the Northern Sea Route connecting Asia and Europe to be a “core national interest.” The U.S., among others, considers the NSR to be an international shipping lane.

The opening of the Arctic will also greatly improve Russia’s ability to export energy resources to Northeast Asian nations, especially South Korea and Japan. Moscow has been actively taking steps internally to build the necessary infrastructure to connect future Arctic ports to energy fields inside Russia.