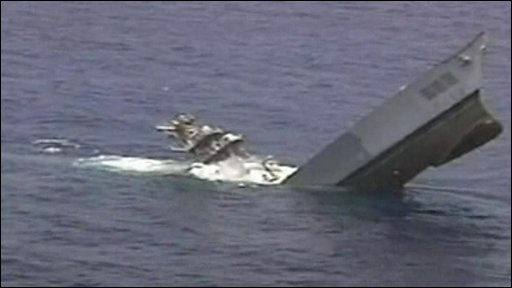 The Iranian revolutionary guards are obviously in highly aggressive mode these days. Just two days ago the news broke out that they’re openly making a mockery of America by sending warships to US maritime borders, and today this statement by the Iranian navy commander was uttered – while the USG is still AWOL, due to its desperate attempt to negotiate its way out of the nuclear crisis all the way to the end of Obama’s term.

On top of that, the Iranians claimed today to have tested new weapon systems, including Multiple independently targetable reentry vehicle ballistics (although these claims have not been verified by western military analysts, and the Iranians are known to have made unfounded claims about indigenous weapon systems in the past). It seems like they’re trying to build up as much perceived power as they can towards the negotiations on the so called “final status agreement” on their nuclear program, assuming it will help them to gain the upper hand over the crumbling US-EU stance.

If they already have the aforementioned missiles then they cannot be forbidden to acquire them by the west, while Saudi Arabia has not been prevented from progressing with Pakistan. It seems like Anglo-America encourages a nuclear stand-off in the ME in order to minimize the Russian penetration to the region, while Anglo-America itself undergoes an internal reset.

One good thing about these recent developments is that the Tehran regime is making life very difficult for its pathetic apologists in the west, many of whom claim to represent “alternative media” venues (be they Libertard or just plain Commie), who tried to portray the regime as an innocent little virgin all those years, claiming it’s just after “peaceful nuclear energy” and poses “no threat to anyone”…

“The Americans can sense by all means how their warships will be sunk with 5,000 crews and forces in combat against Iran and how they should find its hulk in the depths of the sea,” Rear Admiral Ali Fadavi, the commander of the elite Islamic Revolution Guards Corps (IRGC) Navy, was quoted as saying Sunday in the regional press.

Fadavi issued these threats just a day after Iranian war vessels were reported to have approached U.S. maritime borders.

“Iran’s military fleet is approaching the United States’ maritime borders, and this move has a message,” Iranian Admiral Afshin Rezayee Haddad was quoted as saying by the semi-official Fars News Agency.

Iran dispatched the war fleet in “response to Washington’s beefed up naval presence in the Persian Gulf,” where American ships are stationed to help keep international shipping lanes safe, according to the report.

“The Iranian nation should pay attention to the recent [nuclear] negotiations and the rude remarks of the Americans so that everyone gets to know the enemy well,” Khamenei was quoted as saying in the state-run press.

“The Americans speak in their private meetings with our officials in one way, and they speak differently outside these meetings; this is hypocrisy and the bad and evil will of the enemy and the nation should observe all these cases precisely,” he said.

Iranian military leaders continued to threaten the United States – it’s principal nuclear negotiating partner – well into Sunday, when another top Iranian Navy commander claimed that the United States does not have the courage or ability to attack Iran.

“Were the enemy able to inflict damage on us, it would do so; [you must] rest assured that they can’t,” Iranian Navy Commander Rear Admiral Habibollah Sayyari told fellow navy personnel during a ceremony celebrating “the 35th anniversary of the victory of the Islamic Revolution.”

As the United States and its international allies seek to ensure that Iran is complying with a recently inked nuclear accord aimed at rolling back portions of its contested program, Iranian military officials have become increasingly confrontational.

These officials say they are angered by Washington’s vow to keep the military option against Iran on the table.

A top IRGC commander recently stated that “the slightest military move by the U.S. will be reciprocated by Iran’s harshest response,” which would “recognize no boundary”.

It’s unclear exactly how Tehran’s threats are impacting ongoing talks between Iran and the West, which is working to ink a final nuclear deal with Iran in the next six months.

Iranian Defense Minister Hossein Dehqan vowed to crush U.S. forces and said, “Iran will never allow the country’s nuclear fuel production cycle come to a halt,” according to a report in Fars.

A Pentagon spokesman did not immediately respond to a Washington Free Beacon request for comment on Iran’s war moves.

However, an anonymous defense official dismissed Iran’s approach towards U.S. waters and stated that they “are free to operate in international waters,” according to Israel Hayom.