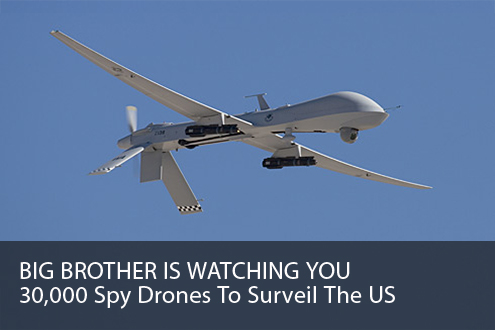 US aviation regulators on Monday released the names of sites picked to test civilian drones whose slated 2015 debut over American skies has sparked privacy concerns.

Testing of the unmanned aircraft is due to start within three months and could continue until February 2017, the Federal Aviation Administration (FAA) said in a statement.

The FAA has said some 7,500 small unmanned aircraft can be expected in US airspace in the next five years — provided regulations are in place to handle them.

As well as law enforcement, supporters say civilian drones could be used for a vast range of applications, including tracking the progress of wildfires, helping to find lost skiers, identifying criminals or mapping inhospitable terrain.

Data from the testing “will help the FAA answer key research questions such as solutions for ‘sense and avoid,’ command and control, ground control station standards and human factors, airworthiness, lost link procedures and the interface with the air traffic control system,” the FAA said.

Operators include the University of Alaska, whose winning proposal covers seven climatic zones and foresees testing in the states of Hawaii and Oregon.

The state of Nevada will, among other things, focus on how air traffic control procedures will evolve with the introduction of drones.

Another chosen operator, the North Dakota Department of Commerce, is the only one to offer testing in a temperate, continental climate and a variety of different airspaces, according to the FAA.

The sixth operator, Virginia Polytechnic Institute and State University, known as Virginia Tech, will conduct “failure mode testing,” with sites in both Virginia and New Jersey.

The FAA said it had received 25 proposals from 24 states and made its selection following a 10-month selection process.

It noted in its announcement that, as laid out in November, test site operators must comply with federal, state and other privacy laws and have a “written plan for data use and retention.”

Michael Toscano, president and chief executive of the Association for Unmanned Vehicle Systems International, representing drone makers, welcomed the FAA’s announcement, calling it “an important milestone on the path toward unlocking the potential of unmanned aircraft.”

According to Toscano, the market for civilian drones will lead to the creation of 100,000 jobs over the first decade following their integration into US skies. That would generate more than $82 billion, he said.

The American Civil Liberties Union urged Congress to ensure the protection of privacy.

“We’re pleased the FAA acknowledges the importance of safeguarding privacy in the testing areas where drones will be flying, but requiring test sites to have privacy policies is no guarantee that every site will put strong protections in place,” Catherine Crump, the group’s staff attorney, said in a statement.

“Someday drones will be commonplace in US skies and, before that happens, it’s imperative that Congress enact strong, nationwide privacy rules.”

An explosion. A spike in radiation. Evacuation preparations. What exactly happened in Russia?