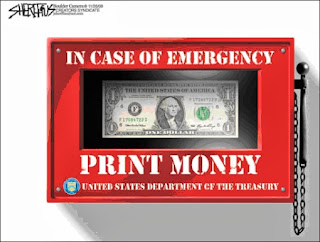 Deflation in the USA of the last 100 years would lead to a default on Treasury obligations e.g. T-bills, thus ending the global reserve currency status of the USD. This is because a deflation cuts-short the public liquidity, which is the pool from which the public indebtedness to the private partial reserve system is being serviced. This indebtedness grows to infinity along a column of compound interest, imposed on the issuance of fiat currency. (Link 1: The Biggest Scam In The History Of Mankind).

This article surveys the 5 main avenues by which the Anglo-America raids and plunders the wealth out of the common people in many countries,in order to prevent a deflation of the USD, likewise of the GBP.

2.2 Rigging the Libor allowed to pervert the monetary policy,

in order to provide the  speculators with low interest,

which is their decisive cost of doing business, on   the expense of savers and while prompting the real-estate bubbles.

4.1 Obamacare – a slash fund, based on socialism, at present on a 3 month probation
i.e. Till mid January 2014, subsequent to the ‘Shut down’ of mid October.
Two weeks ago we wrote (Link 7: Obomunism’s Make or Brake) on how

Obamacare is a tool in the hand of the ruling banking cleptocracy.
This time round, we give some numbers, in order to compare Obamacare

to the ongoing nominal QE, which needs be tapered eventually:

Thus, it would suffice for Obamacare to increase the Total Health Expenditures by 35%, in order to substitute for the Monetary QE, i.e. in order to form a stealth QE. The down side is the strangulation of the popular consumption base,which is typical of a capitation-tax.

In the coming 3 months, Christmas shopping included, the initial impact of Obamacare on the economy is yet to be discovered, then. This is one strong reason for Obamacare to slow down its roll out, i.e. to minimize its socio-economic silhouette while fledgling.

4.2 The UK privatizes its NHS – a step closer to a British Obamacare, then?

This happens while the UK’s NHS(National Health Service, aka No health service)

is being privatized on the cheap.

5. Inflation – via devaluation of public budgets

Inflationism can be sustained only while people believe the government can repay its debt; beyond that threshold, extraneous issuance of currency leads to uncontrollable collapse of the currency i.e. to a financial reset, involving a comprehensive loss of freedom and then if the financial cult remains on top – resulting with an all-round 3rd world country.

6. Turning Anglo-America into a second China i.e. Enslaving the commoners

This is while the GIPSI & Slavic countries cannot expect for anything better.

In short, the entire saga of a civilized society seems over for humanity ever after.

6.2 Link 9: Osborne wishes Britain would be more like the communist country.

What was the Government ‘Shut-down’ about?

1. GOP, like all (big) political parties, is a front of the Puppeteers,

namely a set of strings along others.

The insurance price hike is a slash fund.

3. Once inflationist Yellen was nominated,
the GOP put Obama on a probation for a quarter:

if Obamacare, i.e. increased taxation, doesn’t provide the liquidity,
then Yellen would, by means of decreased services.

From Obamacare to Currency war

Obamacare is Deflationary, by means of soaking the common people dry,

thus is contradictory to the currency-wars concept first published in 2010:

The Origins of Obamacare

Obamacare is a coup-d’etat by the CIA in conjunction with letting Iran win regionally and growing influence globally in the role of narco-militarism. Obamacare was envisioned in the time of the ‘Amero’ (Link 12: North American monetary union),

namely when Wall-street was on the offensive. By now Wall-street is on the defensive (Link 13: Faster Than A Speeding Forklift, Link 14: JPMorgan to pay $13 Billion Penalty for Role in 2008 Financial Crisis) thus the Amero is shelved and so shall be Obamacare, in favor of focusing on the global currency war.

Following the 2006/7 trans-Atlantic Real-Estate crisis,which caused a liquidity cringe, George W. Bush told the Saudis in October 2008 he wouldn’t attack his narcotics business-partners in Iran.In response the Saudis pulled the plug on Wall-street and elected Obama to bow before them and to instill the Arab-spring. The combination of Inflation with War, while shutting the door on illegal-residence/Obamacare, may be the way to repeal that coup-d’etat. (Link 15: Bin Laden, Bush Serve the Same Master [2002])

If Obamacare proves to be an economic disaster and thus needs be shelved, and if Iran remains devoted to its nuclear program, then by late January 2014 the US can still pull one more year of QE in order to finance a military campaign against Iran, prior to trimming the Administration down to its constitutional mandate of conducting only the necessary functions of regime.

While the Christian members of NATO distance themselves from the guerrillas in Syria, the Muslim supporters of the guerrilla, Saudia and Turkey, take the lead:(Link 16: Syria: the Christendom distances itself from the rebels.)

While Christendom starts now gearing up towards the Christmas shopping season, the west pacifies the appearences of its regime and of its overseas interventionism, in order to allow for a prosperous shopping and business atmosphere. The revenues of this heightened commercial period shall be summarized on early January 2014 and along the ongoing negotiations with Iran shall have important influence on the next strategic decision junction late January 2014. January is the ripe time for deciding about Iran, just before Spring time, and it was indeed in late February 1991 and in March 2003 that the US started its wars in the Persian Gulf.

If the US goes to war against a stubborn Iranian regime, it may go for both Obamacare and inflationism simultaneously, while the ensuing spiking Petroleum prices may hold the USD status throughout the initial inflationary period. Although the Iranian Petroleum and Natural-Gas reserves may suffice in order to service the interest on the US debt, these proceeds are crucial for feeding the Iranian population, which simply lacks any other large source of income and is already typically quite poor.