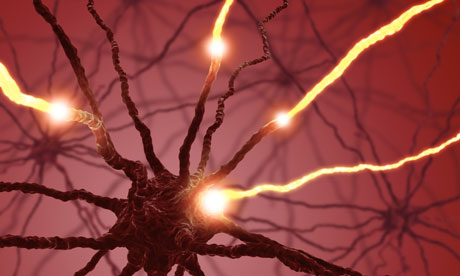 The military has a genuine interest in brain stimulation research. Photograph: Alamy

About five years ago, not long after I started up my research group at Cardiff University, something rather strange happened. One morning I came down to my lab to find the door wide open and a suited man standing in the middle of the room, peering around and scribbling on a clipboard. He told me he worked for a private defence firm who were interested in applications of my research on human brain stimulation. He also said there was funding available for joint research projects. We spoke for a couple of minutes before I made it clear I wasn’t interested in that sort of collaboration.

Thinking about it afterward, something about the encounter chilled me. It wasn’t the fact that this person had gained access to the lab seemingly unannounced, and it wasn’t even the sense of entitlement that seemed to exude from the guy, as though he was standing in his lab not mine. What bothered me was the realisation that the work I do operates anywhere near the line where a military firm might find it useful. My opinion at the time – still unchanged – was that I would sooner quit science than get into bed with the profiteering wing of those whose raison d’être is foreign intervention and invasion.

Five years later, brain stimulation research has moved far and fast. A fascinating new issue of Frontiers in Human Neuroscience includes a timely review on the various ways brain stimulation can enhance thought and behaviour – with special consideration of applications in the security services and military.

Different forms of neurostimulation in humans have now been shown to boost our ability to learn and perform motor actions, to pay attention to events in the environment, to recall information in memory, and to exercise self-control. At the same time, evidence is mounting for more complex effects on cognition. For instance, stimulation of the human prefrontal cortex can enhance or inhibit our tendency to lie, improve our ability to lie successfully, and can encourage us to comply with social norms that carry a punishment for disobedience.

Most of these findings stem from two basic forms of brain stimulation. The first, called transcranial magnetic stimulation (or TMS), uses the physics of electromagnetism to activate brain cells. How this activity influences behaviour depends on what the brain cells are important for in the first place. So, were I to apply TMS to a particular part of your motor cortex then it would make your finger twitch, but if I instead stimulated Broca’s area then it would disrupt your ability to speak.

The second major approach, called transcranial direct current stimulation (or TDCS), works quite differently. TDCS is generally too weak to make brain cells fire – instead it alters the sensitivity of the cells, making them more or less active in response to something that stimulates them later. Both TMS and TDCS can have aftereffects lasting from minutes to hours, sometimes even days, causing changes in neurophysiology and neurochemistry.

As the scientific questions being asked by brain stimulation expand, so too are the methods becoming more sophisticated. One exciting new technique, called transcranial pulsed ultrasound, theoretically allows precise stimulation of any neural region. So far it hasn’t been tested in the human brain but such studies seem only a matter of time. Together, these techniques and their applications hold great promise for understanding the machinery of human mental processes, with hope for treating patients suffering from brain injury and disease.