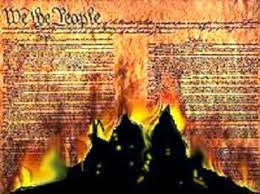 The globalist Banksters are trying now to sneak in their strategic secret weapon: Obama Administration Proposes 2300-Page “New Constitution”, proving it is a total war now, raging between the Globalists/Obama on the one hand and between the Republicans/Veterans/Patriots/Christians on the other hand. It is no coincidence then, that the worldwide war on Christianity is mentioned now for the first time on state-level politics.

The real battle behind the fiscal-discipline fight, which is played on the media under the superficial guise of Shutdown for preventing Obamacare, is deeper and wider and concerns the alternatives of tyranny and oppression on the one hand vs. republic and freedom on the other hand [Link].

It wouldn’t suffice to repel Obama’s front, including the interrogation and incarceration of it members, but also to repel the Lobby system [Link],which is anchored in the constitution and is the mother of all abominations, in bypassing the Political-party mechanism of discussion, of voting and of transparency. It is much harder to bribe a thousand times the number of representatives: the time, money and paper-trail then become prohibitive even for the Mafia, then.

One form of oppression is Obamacare, which introduction requires interim-finance from the foreign tyrannies of China and Russia, which we have mentioned on our recent article Obama’s New-Dealer .

Another form of oppression is the interest paid by the USG to the international private-banking cabal, via its US office – the ‘Fed’, for issuing USD. This has always been forbidden by the constitution.

The default is the only way to purge the $Quadrillions in derivative positions.This shall allow to ban HFT(High Frequency Trading) [Link],thus putting the world on sound footings like it was some 30 years ago.

The impending Default shall return the US to the constitution, by means of ending the loans the USG has and would take, unless the Banksters’ newly proposed constitution is forced on the USA. This new constitution is going to junk Washington DC altogether. The Banksters need this to be concluded very quickly now, since the USG seems to have run out of cash [Link] while the Republicans keep on standing for the republic [Link].

Thus Washington DC must be neutralized totally and immediately, thus is likely to undergo the nuclear false-flag attack, which has been in the making this summer [Link] and [Link].

Following this nuclear False-flag the Federal Government will instantaneously switch to its hideout bunker, which has been in the making since after the false-flag nuclear attack of 9/11 2001, which we covered here  and summarized here . It would also be very difficult to look for evidence in the remains of an open-air large nuclear explosion. The files documenting the property held by the USG, worth over a dozen Trillion USD [Link] & [Link] may be declared missing too, just like the investigation files of Enron and Worldcom in the SEC offices which evaporated in WTC 7 on 9/11. Would that be the ‘perfect crime’, then?

From this bunker, say ‘Obama’s Scorpion’s-nest’, the country will be hijacked and the constitution replaced. This is the promised degenerate ‘change’ of the deprived political left wing, much like it perpetrated the USSR a century ago.The Scorpions nest will not be subjected to public protests like Truckers Join With US Veterans for DC March This Weekend.