“What government and military officials had told Congress, the Commission, the media, and the public about who knew what when — was almost entirely, and inexplicably, untrue. At some level of the government, at some point in time … there was a decision not to tell the truth about what happened…The (NORAD) tapes told a radically different story from what had been told to us and the public.” – John Farmer, Jr., senior counsel to the 9/11 Commission .

The unprecedented horror of the 9/11 attacks still lingers through the collective trauma of the victims and the American people. Nevertheless, as time goes by, the multiple inexplicable mysteries related to those attacks remain unresolved. Many refuse to believe the dubious explanations provided by the 9/11 commission- even some of its advisers (as seen in the quote above), due to the magnitude and complexity of the attacks which pose an extremely demanding challenge to that official narrative. An attempt to explain “what really happened” inevitably leads to multiple and equally dubious “conspiracy theories” which do next to nothing to shed light on the unresolved mysteries. It is perhaps better to avoid the tricky question of “Qui Bono” and focus instead on concrete physical evidence and physical anomalies which can be detected by observing and analyzing the events.

Anomaly:  Why was 9/11 2001 the day with the largest concentration of military drills in US history ?

Officially, the attacks came out of the blue, unpredictable in nature and timing. Yet, that day saw dozens of military drills take place. Many of the drills simulated terrorist attacks on America and involved NORAD operations during hijacked airplanes crashing into buildings – exactly as it happened in reality during the very same day. [see this PDF link]. Is it possible that those drills were used by the perpetrators (whoever they were) as a cover which enabled them to carry out the real attacks by making only a few deviations from the drill scenario ? If so, how could the US defense and intelligence establishment have been subverted in this manner? Is there a danger for a repetition of such an event (especially now with the Syria crisis and all the buzz over a possible false flag?)

Anomaly: Who cracked the secret codes to “Airforce one” ?

This is remembered popularly as the “Angel is next” breach of the presidential airplane. It has been reported independently by Russian intelligence via the ‘Namakon’ website (known to be related to KGB veterans) and by Israeli intelligence via the ‘Debkafile’ website (known to be related to Mossad) . What was done to trace the source of this subversion? Could it happen again ?

Anomaly: The flash seen emanating from the first airplane

How does a supposed civilian airplane produce what appears to be the launching of a hollow shaped charge or incendiary device (picture below) and only then crashing into the tower ? Having mentioned that, how could a bunch of Arab cavemen fly those large planes with robotic precision into those towers after a few hours of training in flight simulators, without ever actually acquiring experience with real Boeing aircraft ? More so, how could one of those alleged hijackers carry out the physically impossible high speed maneuver attributed to the aircraft that supposedly hit the Pentagon ?

There have been many debates over the years about the cause of the towers’ collapse which many see as the result of controlled demolition. This debate is beyond the scope of this article. However a much more shocking anomaly are the Light Detection and Ranging – LIDAR displays of Ground zero (picture below), which reveals further evidence of craters formed by massive power and heat – most likely a thermonuclear blast. What caused such a blast ? Could it be related to a couple of those 84 suitcase nukes that disappeared off the Russian arsenal after the collapse of the USSR [see this video] ? If so, who bought those suitcases on the black market and smuggled them to New-York? does the thermonuclear blast explain the high rate of cancer among first respondents in ground zero and other New Yorkers who were exposed to the dust from the collapsed towers ? Does it explain the way the towers were pulverized to fine dust at mid air ? 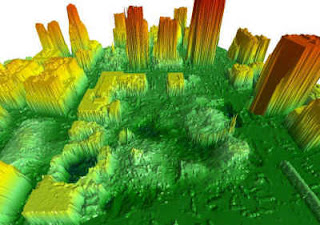 Until the aforementioned questions are seriously dealt with, investigated objectively and answered seriously, no one can claim to tell what really happened on 9/11. The official version is far too dubious to be taken at face value anymore.The victims and their families deserve to get the answers to those questions which the federal government still refuses to address, likewise its cronies in the corporate controlled media- which probably explains the sinking credibility of both.

This post has also been mirrored by Lady-Patriots.com, thereby making it the first 9/11 truth post in a top rated conservative outlet.