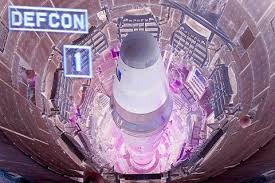 The most prominent fact on display in the G-20 summit in Russia, is Obama’s total isolation in the international arena, as demonstrated by the unproductive face-to-face meeting between Obama and Putin [Link] and the refusal of all but France and Canada to back his war plan. This weakness further emphasizes the ‘wounded beast’ mode the Obama regime has been at ever since its crushing defeat in Egypt. As we have warned back then, the beast is extremely dangerous when wounded, so we must assume the greatest danger is still ahead of us.

The abrupt decision last week to call off the Tomahawk strikes inevitably led to the nullification of their predicted effect , since the Syrian regime has used the time to evacuate sensitive facilities and disperse its forces in order to reduce the damage they expect to sustain from Obama’s strike. Actually this has already happened 10 years ago during the Iraq war when the concept of “shock and awe” was tested and failed due to similar reasons. Back then it was only the extensive buy-up of Iraqi officers by the CIA which saved the US military from trouble in the invasion phase of the war. Such a buy-up is not expected this time around in Syria, as far as we can see.

This inherent diplomatic and military weakness of the American position in the region forces US strategists to vastly expand the original attack plan (as reported by ABC and WSJ) and include strategic USAF stealth bombers (by definition, the ‘doomsday weapons’) in order to make up for the inherent weakness of the earlier Tomahawk strike plan. This enhanced plan alone virtually guarantees a wider regional conflict ,simply because miscalculations by all participants are becoming inevitable in such a stressful situation (even if we assume that the Syrians and their backers in China and Russia will try to maintain restraint in face of the American attack).

From Obama’s perspective, this heavy handed direct intervention is necessary also for the purpose of saving his Al Qaeda ‘rebels’ from total defeat, especially now that the Syrian army has crushed the much celebrated incursion of the CIA’s 300 Jordanian guerrillas into Southern Syria, which was presumably supervised from CENTCOM’s underground war room in Jordan.

The Mediterranean puddle is becoming crowded by the minute as the super powers mobilize as many of their naval assets as they possibly can [see this Infographic ]. The recent news on Friday suggest that China is about to jump into the party by sending a marines brigade and an electronic warfare ship. Since any Strike on Syria would battle-test Chinese radars in possession of the Syrian army, we can assume the Chinese would like to snoop around in order to better prepare themselves for “America’s pacific century” in the South China sea.

All of the above has put America in a lose-lose situation. If they back down in face of the Russo-Chinese resistance, they will lose their last shreds of credibility and prowess. If they insist on putting their money where their mouth is, they risk a major regional conflagration with unpredictable results,possibly leading to a third world war. Obviously Obama and his lunatic handlers prefer the second option regardless of the price that will be borne by the average Joe in the U.S., and Obama is the last man on Earth who can handle such a complex strategic crisis-  a direct result of his foolish”red line” and even more foolish and hectic decision making process as demonstrated in last week’s abrupt and chaotic change of plans, without even consulting his cabinet.

The globalist plan to bomb Syria, of course, has nothing to do with chemical weapons. It is about the last gasp for the Petro-Dollar, the emergence of energy pipeline geopolitics, the rise of the NatGas Co-op, the new dominance of Russian Gazprom, the eclipse of OPEC, the fall of the house of Saud, and a grand adjustment process in global commerce and banking. [see this very extensive analysis here] . The stakes are much too high now for them to just walk into the sunset, so it should be assumed they are capable of doing anything to get their war. Perhaps a major false flag of some sort, perhaps some more subtle diplomatic blackmail behind the scenes. we’ll know soon enough, but either way, the sad truth is that western civilization currently depends more  on luck then on a non-existent sane and capable leadership .