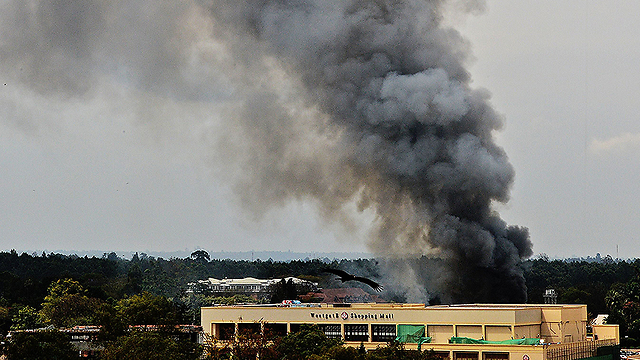 BOMBSHELL: 24 hours after we suggested the Nairobi attack was carried out by MI6-CIA terrorist controllers, it turns out that one prime “suspect” currently promoted by the controlled corporate media in the UK  appears to be the so called “white widow” of the London 7/7 false flag patsy Germaine Lindsay – a clear indication that the official cover story is taking shape right now. As WND reported this morning, the al-Shaabab group recruits American and British citizens to its ranks, in a manner uncannily similar to the standard mode of operation in Londonistan where current “Al Qaeda leader” Ayman Al-Zawahiri was harbored throughout the 1980’s following his participation in the assassination of the Egyptian president Saadat on behalf of CIA-MI6 and their Muslim Brotherhood, and which functioned as a major hub for recruiting Jihadists for the Chechen wars against Russia, as well as for other proxy wars waged by the UK Oligarchy against its former colonies in Africa and the Middle-East.

It is the same London we have identified as prime suspect behind the navy yard shooting last week, the staged nature of which was eerily emphasized by the exclusive exposure by the BBC of the stand down order given to the SWAT team at the site – a clear indication of advance knowledge or intent by the British to embarrass the Obama regime in this manner and show that they can get to the heart of America’s naval HQ at will unless a more aggressive approach is implemented in the Syrian crisis, according to London’s wishes.

The British sponsored wave of terror currently rampaging across the world (in many cases via the Anglophile networks embedded in America’s deep state apparatus) corresponds to the Fed’s latest QE debacle which reflects a desperate attempt to kick the can down the road, only to be faced with an even greater financial meltdown later this year. The bankster establishment is desperate to avoid the consequences and will do anything to that end.

Numerous anomalies have been reported since last week’s event at Navy Yard in DC. During Saturday multiple warplanes and battleships were scrambled in the Tel-Aviv area with some jets spotted flying at very low altitude above the city. Residents also reported the meltdown of cellular networks during this unusual deployment. This was officially explained as “false alarm due to bird swarms detected by the radar systems” -a totally lame excuse which probably covers for an attempted challenge emanating from a foreign player by means of setting up concrete stimuli, i.e. provoking a response and its lessons to be taken later on (EW decoys misunderstood as “birds on the radar screen”?) . On Sunday, an MH-60S Knighthawk helicopter assigned to Helicopter Sea Combat Squadron 6 crashed in the central Red Sea on Sunday while operating with the guided-missile destroyer USS William P. Lawrence which is part of the USS Nimitz carrier group strike force. If the crew is not recovered from such a highly survivable helicopter it could mean it might have exploded in mid air (perhaps after transporting some of the terrorist mercenaries to Kenya? Did the crew suffer the same fate of SEAL team 6 ?)

The modus operandi of the Nairobi attacks repeats the pattern of the Mumbai false flag in India back in 2008, which was orchestrated by CIA asset David Headley from Chicago in a an attempt to trigger war between India and Pakistan, possibly of the thermonuclear kind. As we’ve said yesterday the goal in Nairobi is to further destabilize Somalia which is alleged to be the origin of the British sponsored terrorist patsies. Kenya is also the home of Obama’s half brother Malik Obama who appears in Egypt’s official list of wanted terrorists due to his shady connections to the Muslim brotherhood which has just been outlawed in Egypt . It’s not clear at this point if that particular aspect of the affair is related to a British effort to blackmail Obama or simply to a usual CIA manipulation of the Muslim Brotherhood via the Obama clan (on both sides of the Atlantic…)

Undoubtedly, more details will emerge once the still ongoing counter-terrorist and hostage extraction operation by the Kenyan SWAT teams and their Israeli advisers will come to an end. Stay tuned.