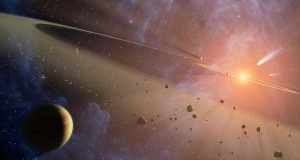 Many of you may not be familiar with the National Optical Astronomy Observatory (NOAO), but I can assure you, the NOAO is familiar with your pocketbook.  By the title of the organization, one might be misled into believing this is a public institution acting in the public interest, but on that point, you would be mistaken.

The NOAO is actually classified as a Federally Funded Research and Development Center (FFRDC).  According to Wiki, there are presently 39 such organizations.  These organizations include the Jet Propulsion Laboratory (JPL), the Lawrence Livermore National Laboratory, the National Radio Astronomy Observatory (NRAO), and other such organizations that most people assume are public entities.

FFRDCs are not publicly owned and operated institutions, they are in fact private entities, which are managed by either a university or consortium of universities, other not-for-profit or nonprofit organization, or an industrial firm.  In the case of the NOAO, they are managed by the Association of Universities for Research in Astronomy (AURA), which is classified as a non-profit corporation.

In most cases, this status as a private entity doesn’t make much difference, but in the case of the NOAO, it does.  Research at the NOAO is funded largely by the National Science Foundation, which is a federal agency.  The bulk of NOAO’s funding (at least 70%) comes from the tax paying public, so one would expect that these organizations would ensure their research findings are turned back over to the public, but that is not the case.

Because the NOAO is classified as an FFRDC, they claim that they are allowed to profit from their research at the expense of the public, while keeping their research private.  The NOAO maintains a copyright policy that requires the licensing of its works for a fee under commercial use.  This licensing system allows the NOAO to profit at the expense of tax payers, and it also serves double-duty as a means of silencing their critics.

Most other FFRDCs follow the same copyright policy as all the other federal institutions.  The copyright policy for federal institutions expressly allows for the commercial use of their works.  Obviously this is because the public paid for the production of the works in the first place, so it would make no sense to then charge the public again for the works that were produced at tax payer expense.  For example, the JPL and the NRAO follow virtually the same copyright guidelines as NASA, which allow for the commercial publication of their works.

This licensing of publicly funded works runs counter to federal regulations governing FFRDCs, which prohibit them from competing with the private sector.  The federal regulations also mandate that the FFRDCs act in the public interest, which would seem to require the open publication of their works. This issue of copyright is distinct from that of classified research, which is kept from the public supposedly for security concerns.

In an email conversation with Suzanne L. Baron Helming, the Procurement Manager for the NOAO, it was related to me that, “NOAO policy allows for the collection of a fee or royalty for use of a copyrighted image by a commercial entity in certain circumstances.”  When asked for her opinion on the NOAOs copyright policy and whether this policy violated federal guidelines, Helming declined to comment.  No denial was forthcoming.

I mentioned earlier that this copyright licensing policy serves double-duty as a means of silencing their critics.  This is because the NOAO can refuse to license their works to documentary film makers that have a problem with the science espoused by the NOAO.  Now whether you agree with the critics or not isn’t the issue, the issue is that the critics should be allowed to use their publicly funded images to make their point.  If their point is illogical or irrational, the NOAO should have nothing to fear.

I became interested in this subject after noticing that the NOAO had issued a take-down notice for a YouTube video that I greatly enjoyed.  When I questioned Helming about this, I received the standard short terse response of, “The Electric Comet video posted on YouTube contained an image created by an NOAO scientist.  This image was used without permission.”

Amazingly, AURA states that, “ It is the policy of AURA, consistent with the Cooperative Agreement, after a limited period in which an investigator obtaining data using NOAO facilities has exclusive right to utilize those data for scientific purposes, to make all such intellectual property available for free use by the astronomical community throughout the world.”   So are they suggesting that a science documentary doesn’t fit the definition of “the astronomical community?”  A close look at their policy indicates the Electric Comet video doesn’t even come close to violating their published policy guidelines.

I can’t recall ever seeing the NOAO issue a take-down notice for any of the dozens of videos that use their images on YouTube.  All of those neat solar observatory images you’ve probably seen?  They fall under AURA’s management, which puts them under the same restrictive copyright guidelines.

To me, the take-down notice looked like it was politically motivated.  The researchers at the NOAO wanted to silence their critics, so they issued a take-down notice against this video due to the damning evidence it presented against the majority of their researcher’s theories.  They didn’t like it, so they used their power of copyright to squash it.  The video had generated tens of thousands of views before it was taken down, and was beginning to gain traction with the public.

To sum up here, the NOAO takes public funds to produce private works.  The NOAO then profits at the expense of the public by selling those works and collecting royalties on them.  And the NOAO competes with private observatories in the images market, in direct violation of federal guidelines.  Further, the NOAO appears to have used its power of copyright to silence documentary film makers who are critical of the science it espouses.  All of this strikes me as exceptionally bad form for scientists, and possibly illegal.

I’m a firm believer that science should be conducted openly and without restrictions.  Patents and copyrights impede human progress by granting monopoly privileges to private producers.  Just look at all the money wasted on patent suits between mobile phone producers.  They all end up copying each other anyways, but the reason they keep the patents around is to keep the little guys out of the market.  Samsung can afford to fight Apple and lose, but Joe’s Backyard Mobile doesn’t stand a chance.